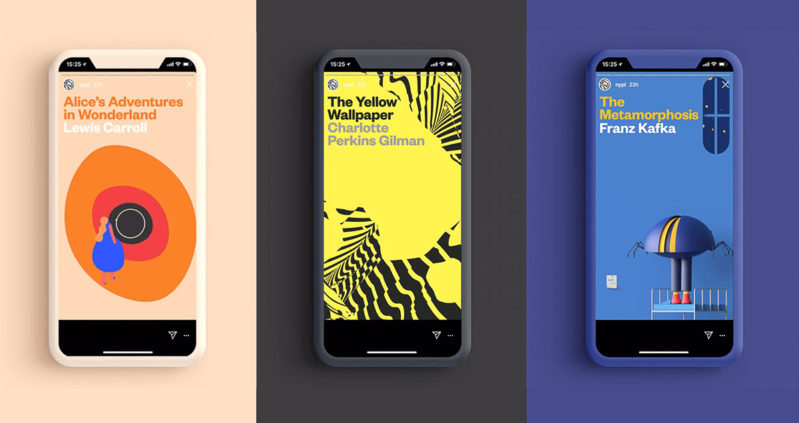 The New York Public Library is using the Instagram Stories to sneak a bit of literature into the infinite sea of seductive selfies on social media.

The public institution has partnered with New York-based creative agency Mother to introduce “Insta Novels”, an initiative which repurposes Instagram as a platform to share classic short novels.

The project will start with three titles, Lewis Carroll’s Alice’s Adventures in Wonderland, the short story The Yellow Wallpaper by Charlotte Perkins Gilman and Franz Kafka’s The Metamorphosis.

Each story is promoted and decorated by gorgeous short animations made by some of the most in-demand graphic designers and illustrators in the advertisement scene right now.

Magoz was entrusted with the task of illustrating Alice’s Adventures in Wonderland, Buck will do the same for The Yellow Wallpaper and César Pelizer will bring his magic to The Metamorphosis.

Each title will be cut into a series of small chunks that Instagrammers can digest during their daily commute.

The initiative in August with Alice’s Adventures in Wonderland, which is currently in its second part. The other titles will be released in the coming months.

If your interest is piqued, the first step is to go to the New York Public Library’s Instagram account (@nypl) and tap Part 1 of Alice’s Adventures in Wonderland in the highlights section located just under the bio.

To hold each page, simply rest your thumb on the lower right corner of the screen and lift it to flip to the next page. If you let the pages continually flip an animation will appear.

If you’re not the Instagram type but you’re still intrigued about the project, the three books will also be available on the library’s free e-reader app, SimplyE, available on the App Store or Google Play.